Spring is in the air, and foaling season is here again. The arrival of a new foal can be an exciting time. What will it look like? What shall we call it? What kind of personality will it have? The eleven-month equine pregnancy gives us plenty of time to prepare for the birth, eleven months that will pass very quickly, and it’s never too early to get cracking! So what can we expect?

The mare needs regular exercise during the pregnancy to maintain condition and general health, but she should not be ridden after seven months into the pregnancy. The usual grooming routines apply, even during pregnancy, and hooves and coat should be maintained as always.

As a rule of thumb, you should consult your vet about which vaccinations your horse may need throughout her pregnancy. Booster injections will go a long way to protect against Equine Herpesvirus 1 (EHV-1), a strand of the Herpesviridae family that can cause abortion, respiratory disease and occasionally neonatal mortality in pregnant mares.

The foetus will encounter most of its growth in the last three months of the pregnancy, when the mare will start to show. This foetal growth will, in turn, increase the mare’s nutritional requirement from about seven months on, but as every animal is different, your vet will give you advice on increasing feed.

Pregnant mares should be allowed out to graze. But (and there’s always a but!), any pregnant mare in her last trimester should be kept away from fescue grass. Fescue is sometimes used as feed for horses. However, fescue poisoning, caused by ergot alkaloids produced by the endophytic fungus Epichloë coenophiala, is a risk for pregnant mares. During the last three months of pregnancy fescue poisoning increases the risk of abortion, stillbirths, premature separation of the placenta, absent milk production and prolonged pregnancy.

The big day draws near

The mare will “bag up” as the foaling time approaches. Her udder will begin to swell and she’ll start to produce milk. Waxy plugs will begin to form on her teats and she may even begin to drip some milk. You can buy kits that will measure the calcium levels in your mare’s milk. These levels can give a good indication of when the mare will foal.
On the big day, the last thing you want is to be running around trying to find a torch and gloves, so you’ll find it very useful to have a basic foaling kit assembled well in advance. Having the following items to hand will ensure you get off to a good start: 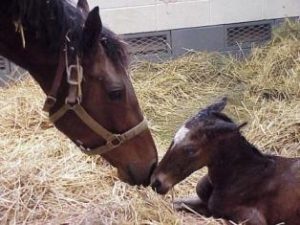 You’ll notice a marked change in your mare’s behavior in the hours prior to foaling. This behavior is similar to colic symptoms and occur as a result of contractions of the uterine. She will become restless and may pass small quantities of manure. She’ll get up and down repeatedly and look frequently at her flank. These signs are very strong indicators that delivery is imminent, and will and give you a good timeline for calling you vet.

Being aware of the three distinct stages of foaling will help you monitor progress.

A foal can arrive at anytime, but the hours between 10pm and 2am are the most common. Foetal fluid (allantoic fluid which surrounds the foetus in the placenta) is ruptured and the mare’s water breaks.

After the mare’s waters break she will experience strong abdominal contractions. The foal will now move into the birth canal and is ready to be delivered.

When the foal is properly aligned, the first thing apparent at the start of delivery will be its two front feet, with the soles facing downward and one hoof slightly ahead of the other. This will be followed immediately by the nose. Any variation in this sequence indicates that the foal is incorrectly positioned and the presence of a vet will be essential to ensure delivery of a healthy foal.
The actual birth normally takes less than twenty minutes. Mares usually lie on their side when pushing and won’t require any assistance. Intervention will only be necessary if the mare is slow to deliver, or is standing. The contractions will stop after the foal’s hips are out.
Soon after the delivery the mare will lick and nuzzle the foal. She will also encourage him to stand up and start nursing. Within an hour of birth the foal should be standing, or attempting to stand.

Twenty to thirty minutes after the birth the mare passes the placenta, marking the final stage. This stage will be accompanied by mild contractions and the mare should not be assisted in the process – she’s best left to her own devices. Attempting to pull out the placenta can result in the placenta tearing, with the risk some of it remaining in the uterus, resulting in serious infection and laminitis.

The new foal will need help both from its mother, and its owner, in its first hours. The umbilical cord normally detaches unaided within a few hours of the delivery. The umbilical area is always vulnerable in new foals and should be treated with diluted iodine to help prevent infection.

Assist the newborn foal’s breathing by removing any mucous from its nose, and make sure that the foal is nursing. The mare’s first milk (colostrum) will provide the foal with antibodies that are necessary for a healthy immune system, so it’s crucial that the foal is feeding from this vital source.

Spring is most definitely in the air – enjoy reaping the rewards of responsible animal ownership!

Feeding Equine Gold™ Immune/Digestive Supplement to pregnant mares can help to maintain condition in the later stages of pregnancy when appetite may limit feed intake. Scientific studies have also shown that live yeasts can support good lactation. Live yeast can also help to support foetal growth when fed in the last three months of pregnancy.